Black Agate is a type of chalcedony, a mineral in the quartz crystal family. It is a grounding stone that brings emotional, physical and intellectual balance. Black Agate meaning is defined by its strong connection to the Earth.

It is a beautiful stone to have with you when you’re feeling down or overwhelmed, as it will help to bring a sense of calm and perspective. It is also said to be a powerful protection stone, absorbing and transforming negative energy. In this guide, we will explore the history, meaning and healing properties of Black Agate.

Black Agate meaning stands for protection, strength, and balance. This type of agate is believed to provide emotional and physical strength to those who wear it, and it is believed to help keep negative energy away. Additionally, this healing crystal provides a calming energy and balances emotions, making it a great stone to use during meditation.

This black chalcedony is a microcrystalline variety of Quartz. It is usually black, with white and grey bands or ribbons of color. Physically, it is very hard, with a Mohs scale hardness of 7. It has a waxy luster, and it is translucent to opaque. Its chemical composition is SiO2.

Black Agate is formed from silica-rich fluids that fill cracks and cavities in volcanic rocks. Over time, the fluids cool and harden, forming the agate. The bands of color that often appear in the stone are due to trace amounts of iron, carbon, and other minerals, which form as the silica-rich fluids carbonize and solidify.

Black agate, a variety of chalcedony and part of the agate family, has been used for thousands of years in various cultures for both practical and spiritual purposes.

In ancient times, the Sumerians believed that black agate had the power to protect the wearer from evil spirits and had healing properties. They also used it as a talisman to ward off bad luck.

The ancient Egyptians also used black agate in jewelry and amulets. They believed that the stone had the power to protect the wearer from the “evil eye” and to bring good luck.

In the 19th century, black agate was popular as a mourning stone. It was believed to bring comfort to those who were grieving.

Today, black agate is still used in jewelry and as a decorative stone, but its spiritual and healing properties are often less emphasized than in the past.

Black agate is believed to be particularly useful for grounding and balancing the root chakra.

The root chakra, also known as the Muladhara chakra, is associated with the base of the spine and is said to be connected to our sense of safety and security. It is believed that when this chakra is balanced and open, we feel grounded and stable, and when it is blocked or imbalanced, we may feel anxious, fearful, or disconnected from our physical body.

Some people believe that black agate has properties that can help balance and stabilize the root chakra. It is said to have a grounding and stabilizing energy that can help to release fear and anxiety and promote a sense of safety and security. This is why it is often used as a healing stone for the root chakra in crystal healing, meditation, and other spiritual practices.

Black Agate is believed to have some healing properties such as grounding and balancing energy, reducing stress and negative feelings, and promoting physical and emotional healing.

Stress relief: Black agate is said to help to reduce stress and anxiety by grounding and balancing the energy in the body.

Emotional balance: Black agate is said to help to balance emotions and to promote feelings of inner peace.

Comfort: Black agate is said to provide comfort and support during times of grief and loss.

Confidence: Black agate is said to boost self-confidence and to help to overcome fears and insecurities.

Support: Black agate is said to provide emotional support and to help to overcome feelings of isolation and loneliness.

Black Agate is believed to have spiritual healing properties as well. Some of the traditional beliefs include:

Protection and grounding: Black Agate is said to provide a protective energy that helps to ground the wearer and keep them centered.

Inner strength: It is believed to help the wearer to find their inner strength and overcome difficult situations.

Release of negativity: It is said to help release negative energies and emotions, such as fear, anger, and resentment, and to promote a more positive outlook.

Spiritual growth: Some people believe that black agate can help promote spiritual growth and awareness by connecting the wearer with their higher self.

Enhancing meditation: It is said to help the wearer to focus and enhance their meditation practice.

Black Agate is believed to have grounding and stabilizing properties. It is said to help with physical strength and balance, as well as emotional and intellectual balance. Some people also believe that it can help with healing in the digestive and reproductive systems, and that it can alleviate pain and tension.

Ways to Use Black Agate stone

There are several ways to use black agate crystal for its believed healing and metaphysical properties:

Ways to use Black Agate as jewelry

Black agate can be used in a variety of ways in jewelry making. Some popular options include:

Strand necklace: Black agate beads can be strung together to make a simple yet elegant necklace.

Earrings: Black agate beads or pendants can be used to make dangle or stud earrings.

Bracelets: Black agate beads can be strung together to make a bracelet, or they can be used as part of a beaded design.

Rings: Black agate can be used as the centerpiece of a ring design or as part of a multi-stone ring.

Pendants: A single large black agate stone can be used as a pendant, or multiple smaller stones can be used in a cluster pendant design.

Before using it for jewelry making, it is important to cleanse the stone and ensure that it is free from any cracks or fractures, as it is relatively fragile

There are several ways to cleanse black agate:

Sunlight: Leave the black agate in direct sunlight for a few hours. The sunlight will help to clear any negative energy and recharge the stone.

Moonlight: Leave the black agate outside or near a window during a full moon. The moonlight will have a similar effect as sunlight and recharge the stone.

Saltwater: Soak the black agate in a bowl of salt water for several hours. The salt will help to remove any negative energy and cleanse the stone. Use a soft cloth to pat dry the black stones.

Sage: Hold the black agate in the smoke of burning sage for a few minutes. Sage has been used for centuries to purify and cleanse crystals.

Sound: You can also use sound to cleanse your black agate. You can do this by ringing a bell or chime near the stone, or by singing or chanting near it.

Visualization: You can cleanse black agate by visualizing white light surrounding it and imagine all negative energy being removed.

It is important to note that, after cleansing the stone, it should be left to dry naturally and should not be wiped or rinsed with water.

What is Black Agate good for?

Black agate is believed to have grounding and stabilizing properties, making it a good stone to carry or keep in your environment if you need to feel more centered and focused. It is also said to help with emotional balance and protection from negative energy. Some people also use black agate in crystal healing to help with issues such as insomnia and anxiety.

Black agate is said to be a protective stone that can help to shield the wearer from negative energy and emotions. It is also believed to have grounding properties, helping to balance and stabilize the mind and body. Additionally, black agate is said to have healing properties and is associated with the root chakra, which is associated with physical safety, security, and survival.

Is black agate the same as Black onyx?

Black agate and onyx are similar in appearance, as they are both black in color and often used in jewelry and decorative items. However, they are not the same mineral. Agate is a type of chalcedony, a mineral that forms in layers and is made up of microscopic crystals of quartz.

Onyx is a type of chalcedony as well, but it is a solid black, it forms in veins or bands and is typically made up of parallel layers of white and black. So, while they may look similar, they are different types of minerals.

Where do you place Black Agate?

Black agate is typically used as a decorative stone, and it is often placed in jewelry, ornaments, or polished and used as a decorative piece for the home. It can also be used in feng shui to bring protection, courage, and strength.You may place Black Agate under the pillow when you sleep, in the office, near the entrance of your home, near the window sill, or in the living room. This helps to create a positive energy and environment in the home.

Is Black Agate natural or dyed?

Black agate is a type of chalcedony, which is a natural mineral that is found in various shades of black. Some agate specimens can be dyed to enhance or change their color, but most black agate is natural. However, it is important to note that some sellers may dye or treat agate to enhance its appearance or change its color. It is always best to buy from a reputable source and to ask about any treatments that may have been applied to the stone.

What does an agate bracelet do?

Agate bracelets are believed by some to have certain properties that can benefit the wearer. Some people wear agate bracelets to help with emotional balance and stability, reduce stress and anxiety, and promote inner peace and tranquillity. Additionally, it is believed that agate bracelets can help to boost self-confidence and self-esteem, and some people also wear them to help with physical ailments such as headaches, fatigue and general pain. 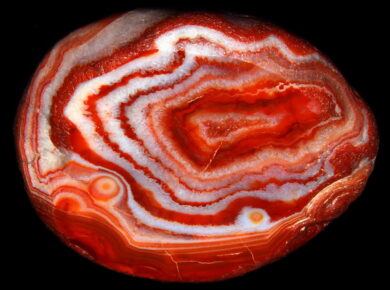 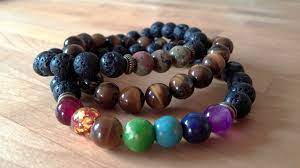 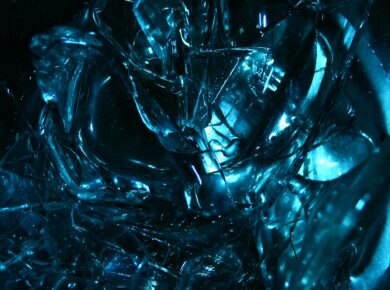 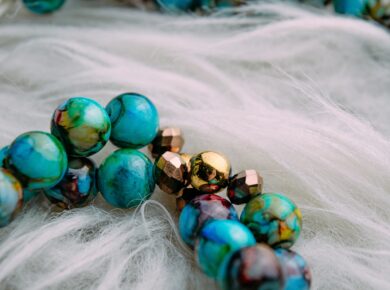 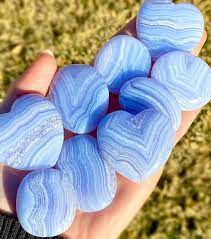 Blue lace agate is a beautiful blue stone with white banding that makes it a stunning crystal. This is a stone of communication and emotions. It relieves one from all…
View Post